What did you do this week after Christmas?

I kept my promise to myself to finish at least one of the waiting quilt tops I'd made this past spring. So I pulled out some green fleece, some green thread for the bobbin to match the fleece, and gold thread for the top to match the bright yellow in the print of the March 17th Snoopy fabric. The fleece was just barely long enough (I had bought a yard and a half of 58" fleece, so basically a square.) My quilt top measured 36 by 50, so my husband Rick helped me trim the fleece to fit the top…

Hi, My name is Stephanie and I received this membership as a Christmas present from my husband and am so excited to learn new quilting skills and talk with the experts.  I wish everyone a Happy New Year and look forward to creating with all of you in the new year!

The days leading up to Christmas Eve found me working on two surprise gifts ... quilts for two brothers who have taken up the bagpipes in earnest. They are brothers, both in high school, and play with a bagpipe band of local players. They compete in tournaments, attend the Scotland Games through the year, and pipe for military and private funerals as requested. They are two generous souls, and talented pipers.

The younger of the two has juvenile diabetes, and his family has been…

My DH bought me a Kindle Fire HD 16gb for christmas.  Now I am learning a new toy.  Means I won't have to be tied to the computer to talk with you all.  Just need to learn how to use it now

Wow I am sure that I am not the only one who has been busy the last couple of weeks.  Last weeks installment of Easy street I did not even start until Thursday morning, while I tried to join the Linky Party to post my progress it was not working.  Oh well here is my part 4 or look at my older posts regarding my part 4 Easy Street. … Here is Quilt #2, declared “finished” last March, but as it turned out, many more hours were required to fix the border problems I ran into.   Quilt #2 was actually REALLY finished on November 15th!  After removing/straightening/removing/straightening  the borders (count them...TWICE), I finally got it to a point where it was as good as it was going to get! The recipient…

I am so glad to be home! I was supposed to be gone another week, but between storms and bratty nieces and too much shopping.. it was time to come on home. For those who don't know.. my sister's husband passed from esophogeal cancer in October, so I went out for Thanksgiving and to help my sister get her house ready to sell and help her find a new house and pack and clean and let her rant and rave and cry about all the things the deceased had or hadn't done while he was alive. The biggest… 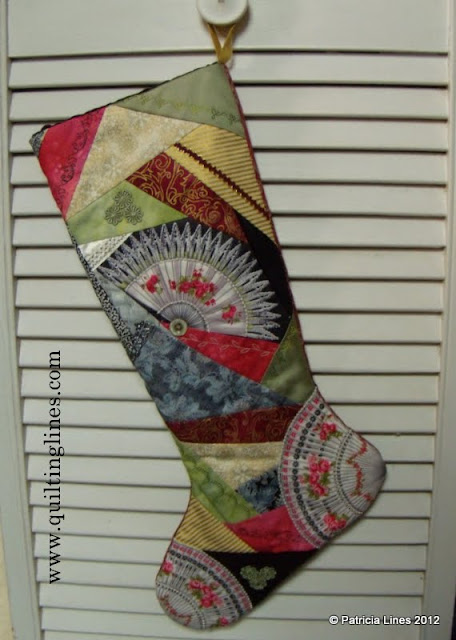 I wrote a little about my Crazy Quilted Stockings.  You might like to read it here.  I played with the fancy stitches on my machine.  …

Hunting for a new sewing/embroidery machine

Can any of you give me advice on sewing/embroidery machines.  The information I have found so far is slanted by the manufacturer; I need hands on information by ladies who are using and loving their machines.  Thanks for any help you can offer. This is my stocking I made for my middle daughter years ago.  I finally finished it just recently and sent it off to her.

OMG this month is flying by!!!

Part 4 of Bonnie Hunter's "Easy Street" Mystery was posted last Friday.  I have been so busy that here it is Thursday afternoon and I am finally starting on it.  Here are the instructions for part 4 http://quiltville.blogspot.com/2012/12/easy-street-part-4.html.…

It's about time for everyone to hang up those Christmas Stockings that you have made over the years.  I'm having a Linky Party over at Quilting Lines .  There are prizes and tutorials so come join the fun!  Party goes through Christmas Eve.  I hope to see you at the Christmas Stocking Hang…

I found a new website (QuiltingHub.com)  that is maintained by quilters for quilters.  I have been delving into their quilting events calendar feature.  I found it so amazing that I had to share with you.

It has been a very stressful week.  My prayers go out to those who lost loved ones in Connecticut, and in Portland, Oregon.  There are times when it seems that you feel the most down that you seem to be buoying up everyone else.  Between daughter and the baby due any time now, the little boys, and other things it  has been a very long week and I am thankful that it is Friday!

Many of us seem to be fighting sickness, and too high expectations that we set for ourselves during the…

I know I’m behind in Christmas decorating, shopping and my annual holiday letter- compared to everyone else around my neighborhood. Most people put up their house lights and their tree right after Thanksgiving, and will take them down right after Christmas.

But growing up in a Swedish community meant that the Christmas season was from Dec. 13, which is St. Lucia’s Day, to January 13, St. Knut’s Day, when you take down your Christmas tree. And I still stick to this time frame because…

12 Days of Christmas and Accessories

Christmas is coming, ready or not!

It has been a while since I have added anything to the 'blog" posts, so while I take a rest from all the 'things' that are happening around here, thought I'd give an update. Both our son and daughter with families in tow are coming for Christmas. Thank goodness, they are not all coming at once or we would be hanging some from the doorways as my Grandma used to threaten to do to her grandchildren. LOL The daughter and family arrive on the 22nd with a departure date of the 26th. The son and…

Good morning my lovelies.  Friday was part 3 of Easy street, which means that Monday is the Linky Party where everyone who is participating shows their progress.  Here is the link to Easy Street Part 3.

I only finished a few blocks.  I did get them all cut and ready to sew but my attention was diverted with my Christmas wall…

The FabShopHop Network is having their November/December 2012 Shop Hop.  While hopping my little heart out I found a blog post from Indygo Junction and they had some wonderful ideas for decorating which would be stupendous for those of use that are sewers and quilters.…