Happy Easter everyone and God Bless!   We are on our way to our daughter's for Easter Brunch and time spent w/family.

Hope everyone has a wonderful Easter Sunday. This is my first time here....I have been quilting for ever; and blogging for a couple of years...hope to meet new quilting friends here too.

I finished binding my first machine quilt and have posted the pictures for those who wanted to see the finished project!  I was very pleased with the way Mom's walker organizer turned out!  The inspiration fabric and cooridnated made all the difference in the world in it's finished look.  Mom at 90 is still quite the coffee drinker, so the print was perfect!  It was so fun making it for her!  It even has a pocket for a traveling coffee mug so she can have her coffee whenever she wants it!…

I am looking for a pattern for the seven pocket case shown on Frayed at the edge blog (http://frayedattheedge.typepad.co.uk) on 3-21-2013. The blogger she thinks it's been handed down. If anyone can help, I'd be so appreciative. Thanks in advance.
Marilyn

I won Viewers Choice and 1st place ribbons on Spring Shadows and 2nd place on Winter Garden at the Decatur  Quilt Fest this past weekend.  I also got to meet Maria Elkins (mariaelkins.com) and see some of her fascinating art quilts in person. Looking forward to a couple quilt shows next month.   And my husband is retired, so he can even keep the 4 yr. old grandson for us.   A quilt show w/o a grandchild tagging along will be a nice treat for a change.   I love my grandkids, but they do get BORED at the quilt shows.   And we all know what a bored child can be like.

I am SO tired of cold and snow.   I always enjoy the first few snow storms, but by March, I am so over it.

I did get some sewing done today, but wasn't really in the mood for it.  Planning on a quilt show in Archibald next month, that will perk me up I'm sure.

What I really want is to be outside for a change.   Walking, sitting on the porch, watching the grandkids playing ball, whatever!   But let me see the sun, let me be warm, let there be springtime!

Wow!!! Were we in for a shock on Friday. We went to UPS to ship one of our pots and found out that our box is now considered oversize inside dimensions 24 x 24 x 47 becomes outside dimenions of 25 x 25 x 48.  This quadruples the weight of the box.  42 lbs becomes 168 lbs. It would cost $315 to ship an $80 pot to Ardmore, OK.  If it were one inch less it would cost $167.  The gentleman suggested we ship on greyhound.  I did not know you could do such a thing.  Greyhound will ship the same box…

Literally eight minutes after talking with a friend this morning about her first blogging experience, and saying I don’t think I could ever do it, I realized that My Quilt Space, one of the places I post pictures of quilts I’ve finished, also offers a free blog page.  Hmm…the fear of blogging versus the fear of missing out on a freebie…and all the cool kids are doing it, so apparently, I would jump off the proverbial bridge if my friends did.

My job today is to finish quilting this…

I guess it's about time I show our 2013 BOM from our LQS.  Again, this year we have the option to make the pieced blocks in 2 different colorways.  This is the pink version. 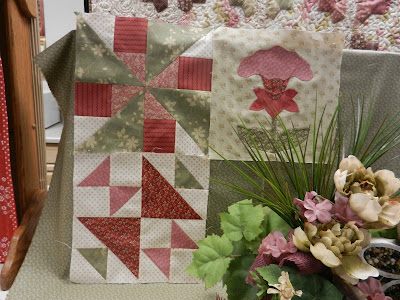 Here is the autumn colorway.  The setting is a Circle of Nine with appliqued leaves.  Will make a beautiful Fall quilt.…

The first 2 blocks are from my class. Just a basic 9 patch and a Crockett's Cabin block. The 9 patch is about 3/8 or so small all around. I was much more pleased with the Crockett block. It is much closer to the finished 12 1/2 " and the triangle points were as close to perfect as I could hope to get at this point. So, progress! Can't wait to see what we'll be doing in April. Meantime, I'll keep playing. Nothing beats practice like more practice!

One Done! More to Go

Finally, the brown scrappy quilt is finished! Quilted, bound and washed! Sigh of relief! It's far from perfect, but I learned a LOT. #1, don't use poufy, poufy batting when quilting on a regular sewing machine unless you have an extra large harp area. I really wrestled with this and only did stitch in the ditch straight lines around the sashing. Since it was made from not really quilting fabric scraps and intended to be practical, I recycled some batting that I had. That's why it was too…

I decided to learn machine quilting this year.  Have a book and bought an online course off Craftsy.com.  I began by reading the part of the book about preparing the sandwich.  I was already doing several things wrong even with my hand quilting.  I changed the batting I was using, made sure i ironed everything well including the batting, and spent a good portion of the afternoon making the sandwich.  The book said to pin every 4 inches. Had to get more safety pins but the result was worth…

The latest adventures in machine quilting....

So, I finally drew a pattern on a quilt and quilted it...I am very bad at following curvy lines with that little round hopping foot. But the quilt is done and it will keep a child on the reservation warm.

So..now I"m trying to follow straight lines. My first day of doing this proved I'm much worse at following a seam line than I was at following a curving line.

Today I tried again.. my poor Irish quilt. I have to say I'm infinitely better now than I was at the start.. which…

I know some of my fellow quilters suffer with this illness or know someone close to them who does. The CFIDS association of America is asking for our help with an upcoming FDA workshop. It's a five-ten minute survey and it will be a great help, here is the link...  https://www.surveymonkey.com/s/pt-focused-survey ..

My last posting was in June right after I put my parents in a nursing home.  Glad to report that they are doing well and love their new home.  The family home has been sorted and sold and my craft room is finally back to being my craft room.  Was still having trouble getting back to quilting so I set myself a couple of goals for the year.  I want to learn to paper piece and machine quilt.  I live in an area that doesn't have a lot of variety of classes being offered, and I didn't want to…

Thanks, the journey is exciting!

Thanks to all for your kind comments and support. Rogue Quilter, the ideas are easier to come by than the execution at this point in time, but your enthusiasm is really encouraging. That's why I want the classes. A lot of it is basic, but I'm learning new things too. And I love that our teacher gives a lot of 1-on-1 as well as sharing from her experience and mistakes why some things work better than others. If you could see the strippy quilt up close, you would see…

The moment is almost here when I can finally move back into my sewing room.  Right now I can move in the Elna, but I'm trying to figure out a way to bring in the Pfaff too. I have a friend who comes over and sews strips and/or squares for me. I.m trying to figure out if the small table will fit and still give me enough room to move around without being too constricted. . Let me explain some of the changes. I've had new windows put in. They've already been tested thanks to Mother Nature; and…

A Beginner Has To Start Somewhere

I'm a beginner, most recently inspired by two grocery bags of scraps given to me. Most of them are some mix of polyester and cotton, but usable for lap quilts. The colors and patterns are all over the place. Since I really don't like to toss stuff, I just started in, not really knowing where to start and having done very little with quilting since about 2000. I'm making my share of mistakes, but I'm okay with that since they help me learn. I'm also taking a beginner quilting class at my…